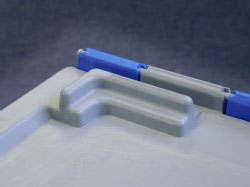 Pluscrates has launched a unique product feature that offers a solution to the age-old stacking problems involved when using both large and compact standard IT crates used in office removals. The feature allows both IT6 and the smaller IT3 crates to be stacked together for safe transit and optimum space usage.

With the varying sizes of today’s IT work stations, most IT relocations require the use of both large IT6 crates and smaller IT3 crates. The large IT6 crate was originally designed to hold 21” monitors but are now typically used to store or move two flat screen IT work stations. Its compact sister crate, the IT3, evolved from the same design but is used to pack a single flat screen monitor, central processing unit (CPU), keyboard and ancillaries. Both the IT3 and the IT6 are similar in their construction with the only difference being their height. The IT3 stands at 465mm high while the IT6 is 615mm high.

The standard crates have been designed with raised corner sections moulded onto their lid to ensure safe and sturdy stacking, however the difference in height means that the base of the IT3 is bigger than that of the IT6. The original raised mouldings designed to stack crates of the same size are therefore ineffective when trying to stack the IT6 and the IT3 together.

John Mitchell, Managing Director of Pluscrates, said, “This size difference in the crates has always caused a bit of a headache in IT moves. Space in the moving vehicles isn’t used effectively because of stacking restrictions and that can mean more journeys need to be made in the moving process. All of this costs time and money.”

Pluscrates has designed a new feature so that any combination of crates can be stacked and transported safely without movement in transit. Pluscrates’ IT6 and IT3 crates have 8 raised locks, two in each corner of the lids, positioned to hold both sizes of crate.

John Mitchell continued, “This is a simple design feature but it is very effective. It solves the problem of loading varying crate sizes and allows for more efficient moves.”

Pluscrates is the fastest growing provider of returnable transit packaging (RTP), containers and packaging consumables in the United Kingdom, providing a premium crate rental service to the commercial relocation and facilities management markets, as well as to the domestic removals market.