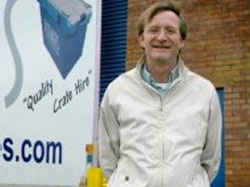 Crate rental specialist Pluscrates has announced the opening of its new premises in Bristol; the new service centre located on the Cala Trading Estate opened its doors for business on 9 February. The move brings the total number of service centres in the UK to five and will enable the company to optimise its services throughout the southwest of England.

When it came to appointing a manager for the new centre regional director Nick Flaxman had a stroke of luck courtesy of social networking site Facebook. “I’d planned to contact a former colleague of mine, Kevin Parkinson at the appropriate time, but quite by chance I noticed a posting on Facebook saying he was planning a career change. I had to act quickly to get Kevin on board but thankfully I got there in the nick of time and he accepted the job. We’ve been offering a local service in the area since October last year.”

As a local man Kevin was ideally placed to advise on the location of the new depot and after a lot of searching found the ideal building just to the southwest of the city. Although originally from Watford Kevin headed west over forty years ago and now regards himself as a West Country man. He lives in nearby Clevedon with his wife Bobbie, a native Bristolian.

“I love the West Country and would be hard pressed to consider living anywhere else,” said Kevin. “I’m thrilled that Pluscrates has recognised the benefits of investing in our region and in me. It makes me feel proud and I’m really looking forward to growing our business here.”