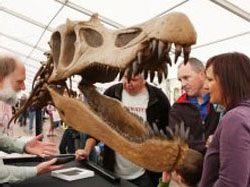 Crate rental company Pluscrates had a rather unusual client recently – a 200 million year-old dinosaur named Edmontaurus! Grace Kimble from London’s National History Museum needed to transport some of the dinosaur’s fragile bones to Dorset for a special exhibition in Lyme Regis and needed some very large crates to put them in.

“Our usual suppliers didn’t have crates big enough to accommodate Edmontaurus but quite by chance I spotted one of Pluscrate’s vans while I was cycling to work down the Harrow Road and gave them a call,” said Grace. “Although they were a bit surprised when I told them I needed them for dinosaur bones, they had just what I wanted.”

Safely stored in several of Pluscrates L6C removals crates, Edmontaurus arrived on Dorset’s ‘Jurassic Coast’ none the worse for his journey from London and ready to meet his adoring public.

More than 12,000 people, many of them children, visited the Lyme Regis Fossil Festival over the weekend of 29 April/1 May, and with the help of scientists from the NHM and other organisations had the chance to get up close and even touch the fossilised remains of giant beasts that roamed the Earth so long ago.

The crates will now be used long term for a school workshop ‘Dino Scene Investigation’ which has been developed to support the summer blockbuster exhibition: Age of the Dinosaur.

“It was certainly an unusual request, but we were pleased to be able to help,” said Pluscrate’s Managing Director John Mitchell. “It just shows how important it is to have sign-written vans!”