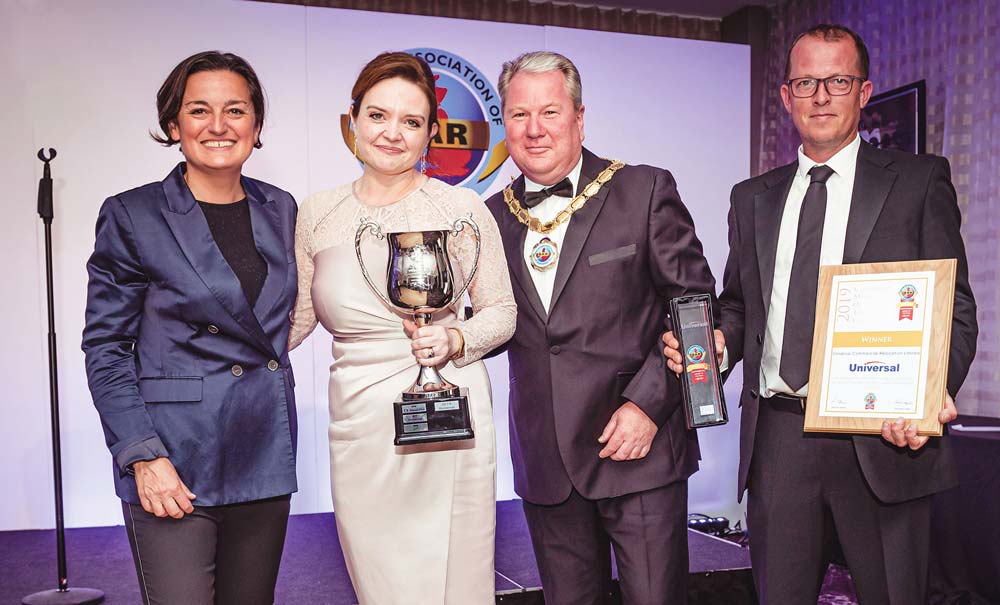 2019 saw the 27th CMOTY award given out and it is safe to say that the standards for this year’s competition were as high as ever.

Day three of the annual BAR Conference, Saturday 25th May, saw the CMG open forum followed by the AGM and the official announcement of the finalists of this year’s CMOTY award. This was preceded by the rundown from David Bunting on how the scoring went, what the biggest losses in points were caused by and comments from the judges.

The three companies who scored high enough to be finalists in this year’s competition were;

Maidmans Moving & Storage Ltd are a leading and highly respected removals & storage and secure shredding company in the Poole, Bournemouth and surrounding areas.

Specialised Movers
Specialised Movers is a removal and storage company employing modern moving methods while adopting a great traditional approach to best practice and customer service. At Specialised Movers, we take time to listen, to understand your needs, and then provide a service tailored to your requirements and budget.

Universal Commercial Relocations
Established in 1978. We take the Universal approach to business relocation, offering comprehensive and wide-ranging services to deliver the right move solution every time.

Certificate of Excellence awards were made to the following companies;

With only two of the eleven entrants not scoring high enough to qualify for certificates of excellence.

Listening to the scoring, the ins and outs of the judging process as well as the comments from the judges; the importance of companies informing their customers of their entry into the competition as well as what is expected of them, as a customer, if they are called upon to give feedback was clearly apparent. The points lost from this simple process not being followed had a massive knock-on effect on the outcome of the competition.

The CMOTY prize winner is announced and presented at the Gala dinner held on the Saturday night of the annual BAR conference. This is a black tie affair and is always well attended, this year’s event was no different. With over 150 attendees, it was a glitzy affair.

Entertainment was provided by ‘Men in Coats‘ and Zoe Lyons who were excellent. Zoe then helped hand out the awards for CMOTY, DMOTY, OMOTY.

And the winner is…

Nick Flaxman was representing Pluscrates as sponsors for the CMOTY this year and after much anticipation, the winner was announced as Universal Commercial Relocation.

This win makes Universal, three time winners of the CMOTY, a clear sign of the high standards which they consistently work to.

Universal specialises exclusively in delivering commercial relocation services to clients based primarily in London and the South East and has recently celebrated 40 years in the industry. MD Sarah Cole personally oversees the quality, environmental and health and safety management systems of the second-generation family business to ensure its accreditations in ISO 9001, 14001, 45001 and BS 8522 are always implemented.

Universal operates in a range of areas within both the public and private sectors including government, banking and education. Its underlying approach is always the same – to provide a bespoke and trustworthy service which proactively supports the client in moving in the most cost-effective, risk-minimised and positive way possible.
Staff are at the heart of the business. Universal prides itself on low staff turnover and its team’s strong commitment to clients, each other and the company itself.

Pluscrates are proud to be associated with and support the BAR, the Commercial Moving Group and be sponsors of the CMotY. UCR’s success in this competition is down to a meticulous eye for detail and consistency in their service delivery. A big Congratulations to Sarah Cole and her team at UCR. – John Mitchell (MD at Pluscrates)

This website uses cookies to improve your experience while you navigate through the website. Out of these, the cookies that are categorized as necessary are stored on your browser as they are essential for the working of basic functionalities of the website. We also use third-party cookies that help us analyze and understand how you use this website. These cookies will be stored in your browser only with your consent. You also have the option to opt-out of these cookies. But opting out of some of these cookies may affect your browsing experience.
Necessary Always Enabled

Any cookies that may not be particularly necessary for the website to function and is used specifically to collect user personal data via analytics, ads, other embedded contents are termed as non-necessary cookies. It is mandatory to procure user consent prior to running these cookies on your website.

Just a quick note to say that Pluscrates is currently open and operating as usual. Extra precautions have been taken to ensure the health and safety of all of our staff and the customers that they come in contact with. Dismiss